I am writing this exactly 3 months after I did this trip. I visited Hampi as part of my office retreat. Well, retreat is a fancy word. Let’s just call it a trip.

So you see? I wanted and didn’t want to go. Eventually, I decided to focus on what I usually do. Get busy in organizing and planning and making my “To do lists.” Which by the way I do really really well (I swear!) I got busy getting the transportation, accommodation and other details done for us 30 odd colleagues. I asked my friend Niki who had been there for a stay recommendation. He swore by Shanti guest house. So, Shanti it was!!

There was a lot of debate on how we travel. I was all for travelling by train. By road, wasn’t appealing or economical (booking a whole bus) In the benefit of saving money, we booked train tickets for all 32 people. We were leaving Hyderabad on 2nd February night and coming back on 5th February morning.

Friday night post work we all rushed back home and met again in the train, people boarding at their respective train stations. After the initial confusion of who sits where, we settled and some of us were ready to call it a night. And some of us were not. I came to know the next morning how some of the boys had been caught drinking by the cops and fined. While they shared their woes, I let them know that they deserved it.

Morning breakfast of Idli and Vadaas at Guntakal station reminded me of my college days when I traveled by trains extensively. 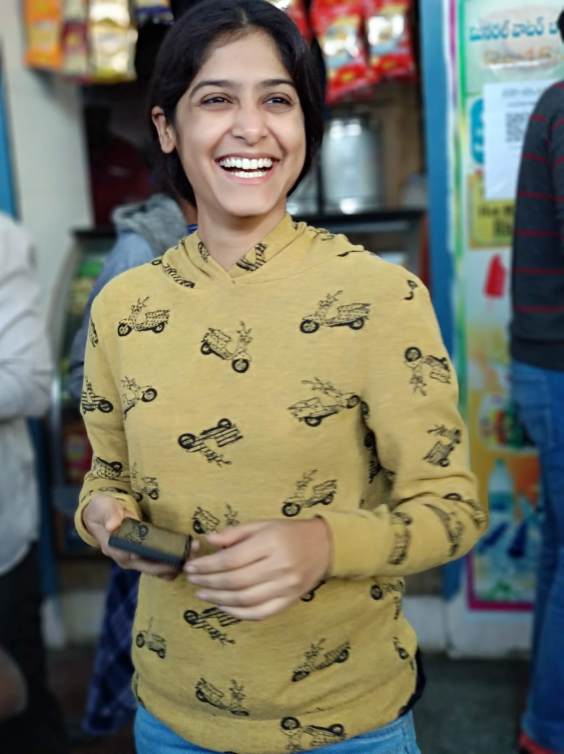 We reached Hampi by around 11 in the morning. We were greeted at the exit gate by multiple auto drivers fighting to take us to the boat. We had to take a boat and go to the other side of the river to the hippie island where we were going to stay. Main Hampi town is usually not preferred as it has a no meat, no alcohol policy. Spoke to multiple autos to accommodate all 32 of us. Watching them all fight over us, almost made us feel like a celebrity. Loading 4 in each, for 200/- each auto we were on our way towards the ferry. When we reached we realized that the river was just a stream and the ferry, a little wobbly boat. It looked we could just wade over to the other side but, I discouraged all of them from doing so and waited in the long queue. While waiting, various auto, car and bus drivers and sight seeing trip providers accosted me. I took a few contact details for when needed. 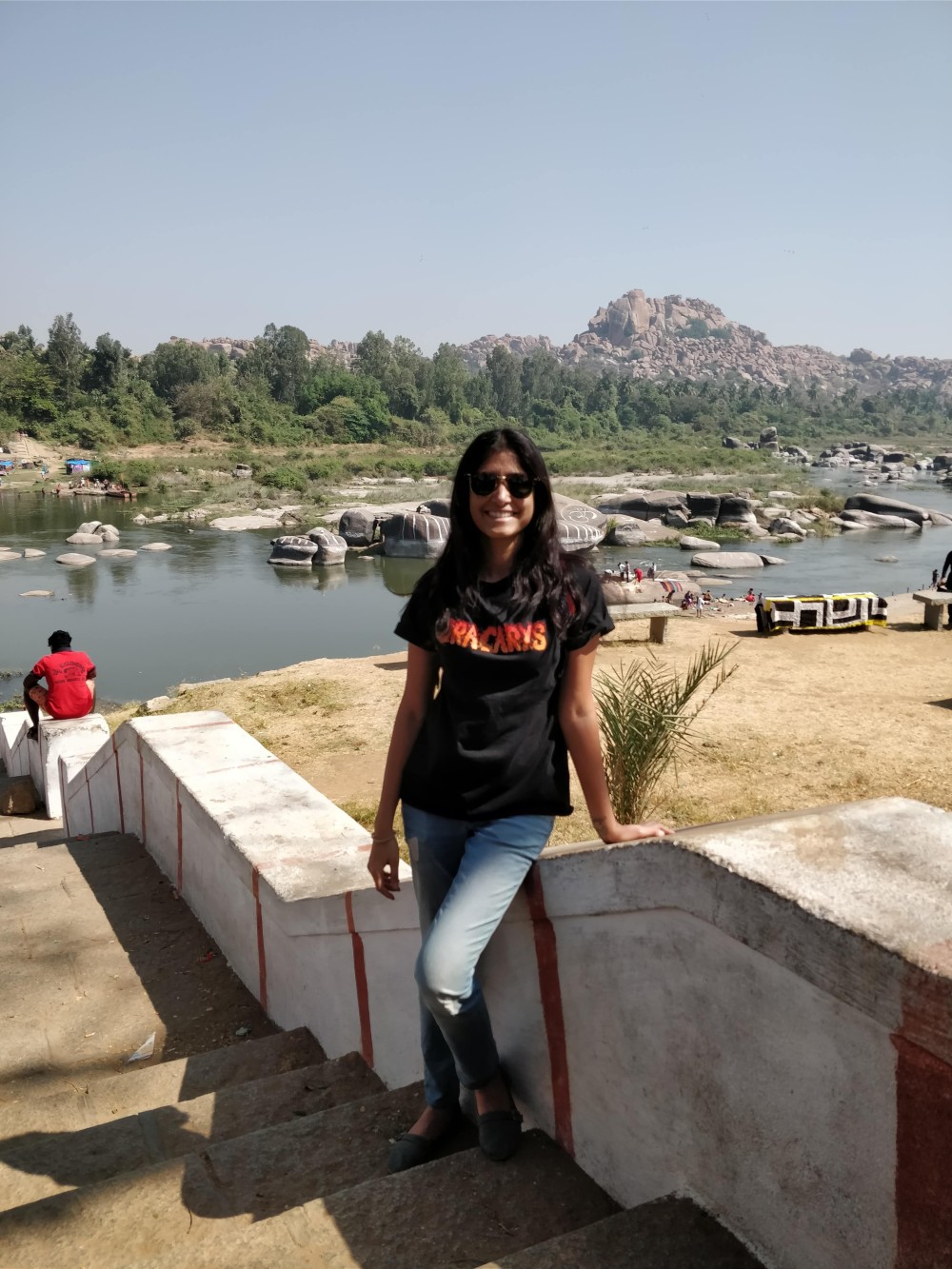 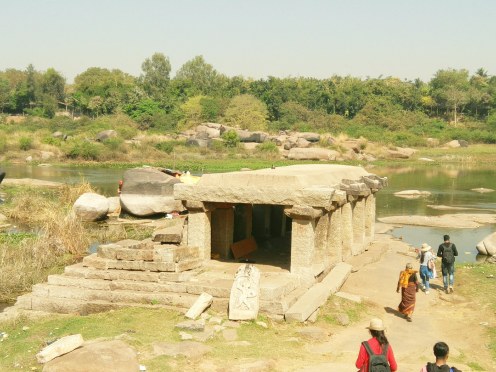 We had a long walk to our hotels on the other side. There weren’t enough rooms in Shanti guest house and hence I had booked a few rooms in the adjacent Mowgli guest house. We made sure, the “fun bunch” stayed together at Shanti and sent the others to Mowgli.

Shanti guest house was everything I was told it would be. Beautiful, cozy rooms set in the middle of lush green grass and trees. Each room with its own old school swing outside. The rooms made us feel like living in the Indian countryside. After a quick shower we all had lunch at the restaurant in our hotel.

One of our colleague’s husband was an avid rock climber and Traceur. He had come to Hampi multiple times in the past and he offered to take us all to the sunset point. I was enjoying every moment with this bunch which loved to take pictures. I don’t remember the last time someone was so happy to take pictures while I posed. Everywhere your eyes could see, it was green. Beautiful paddy fields, which left me, a city dweller squealing with joy. I had never seen one in my life and I took a detour running through them and well, posing for pictures.

After a good while we started climbing up the hill. The climb was a child’s play, but once on top, you have to jump across rocks with chasms between them. That froze me, for a long long while. With a lot of encouragement I made the jump and back. We were too early for the sunset and most of us decided to head back to the hotel, to relax. On the way, we came across a bunch of foreigners practicing rock climbing and most boys from our group tried their hands at it too.  Some, continued their hike to the sunset point on another hill, while the rest of us headed back. 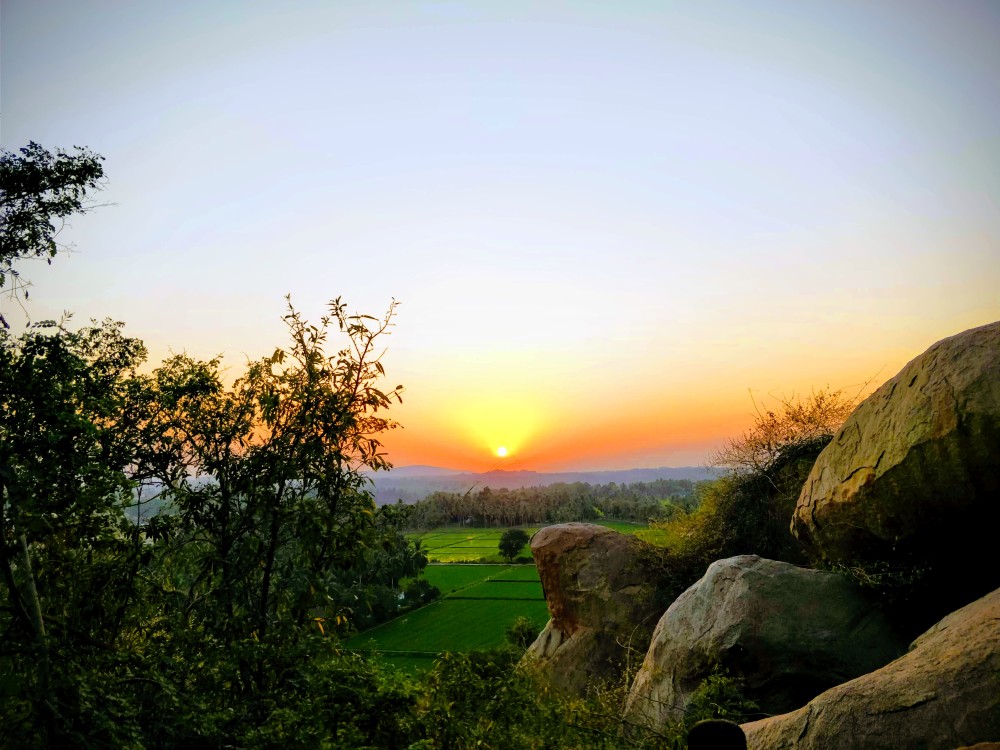 We prepped for an evening of drinks and conversations. After going through a few bottles and loads of snacks, we headed to an Italian restaurant down the street. I really enjoyed the food but I couldn’t say the same for my other colleagues. Most of them are from small towns of Andhra Pradesh and are more comfortable with their staple food, rice. Our CEO who believes every rice lover is uncool, started commenting and ridiculing them. I have no interest of watching that, so I head back to my room for some much needed shut eye.

While on our hike the day before, I had called one of sight seeing trip provider and booked a deal for us to visit the ruins and then head to the railway station for our trip back home. We were supposed to assemble at 9. But, you know the reality when 32 people have to get ready after a night of drinking.

After herding everyone in, we were finally on our way out. As soon as we left, I spotted the ruins of the elephant bridge. In the olden days, an army including elephants used to march over these bridges! 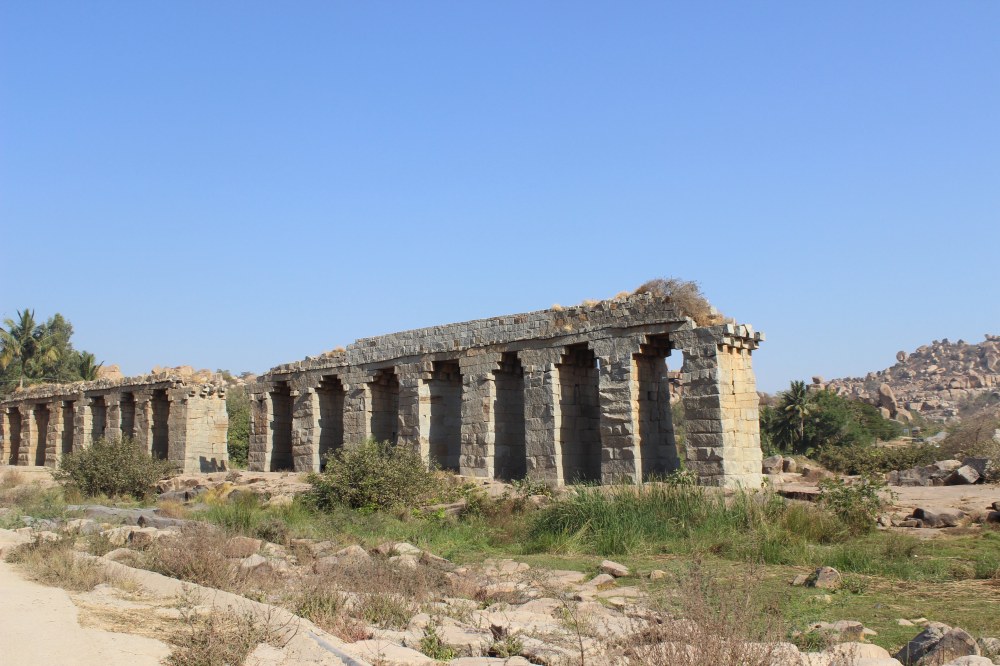 Commercial and private vehicles aren’t allowed near the ruins. This is to protect them from the carbon emissions (the vehicles allowed are eco-friendly vehicles) and also because of a n unfortunate incident a few years ago, when the vibration of a heavy truck near it, led to the partial collapse of main entrance arch. 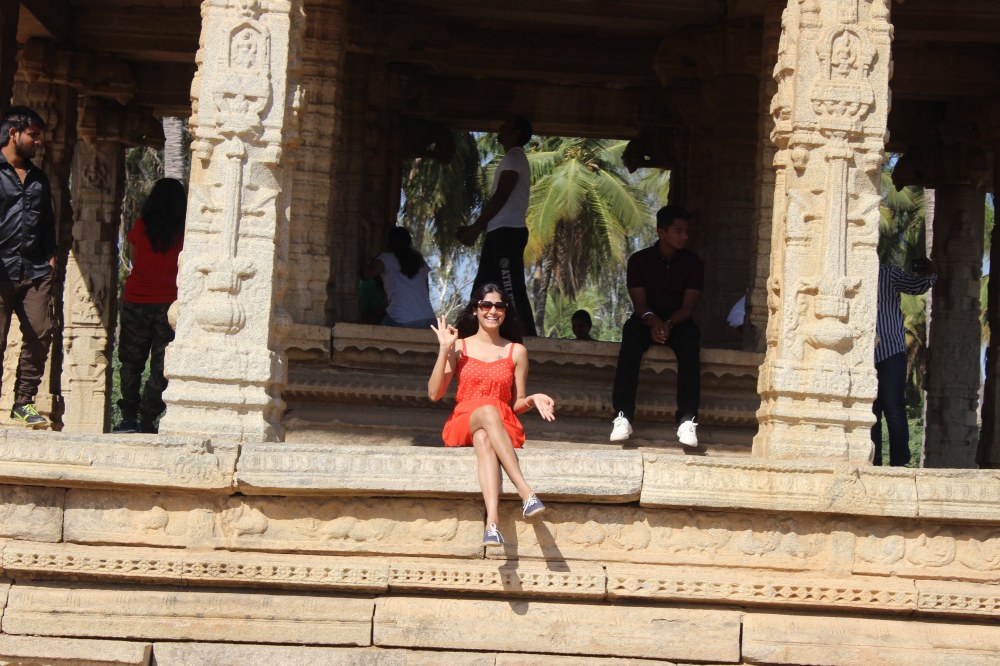 We decided to walk to the ruins and got baked in the process. On our way, we stopped by Pushkarni, which is the sacred water enclosure in temples.

As soon as you enter the main area, the iconic stone chariot greets you. This is the most well known part of the ruin which is also seen on our 50 Rupee note.

This is completely carved out of stone, the wheels movable in the olden era. We took a guide, who shared the history of the place. We were saddened to hear how people had ruined the musical pillars in Ranga mantapa section the Vittala temple and the government made it off limits to public. The Ranga mantapa and the musical pillars were for the King’s second wife who was a skilled dancer. There are carvings through out the temple of horse trading. The ruins of the marketplace can be seen on the left side of the lane when you are walking towards the entry to the ruins. 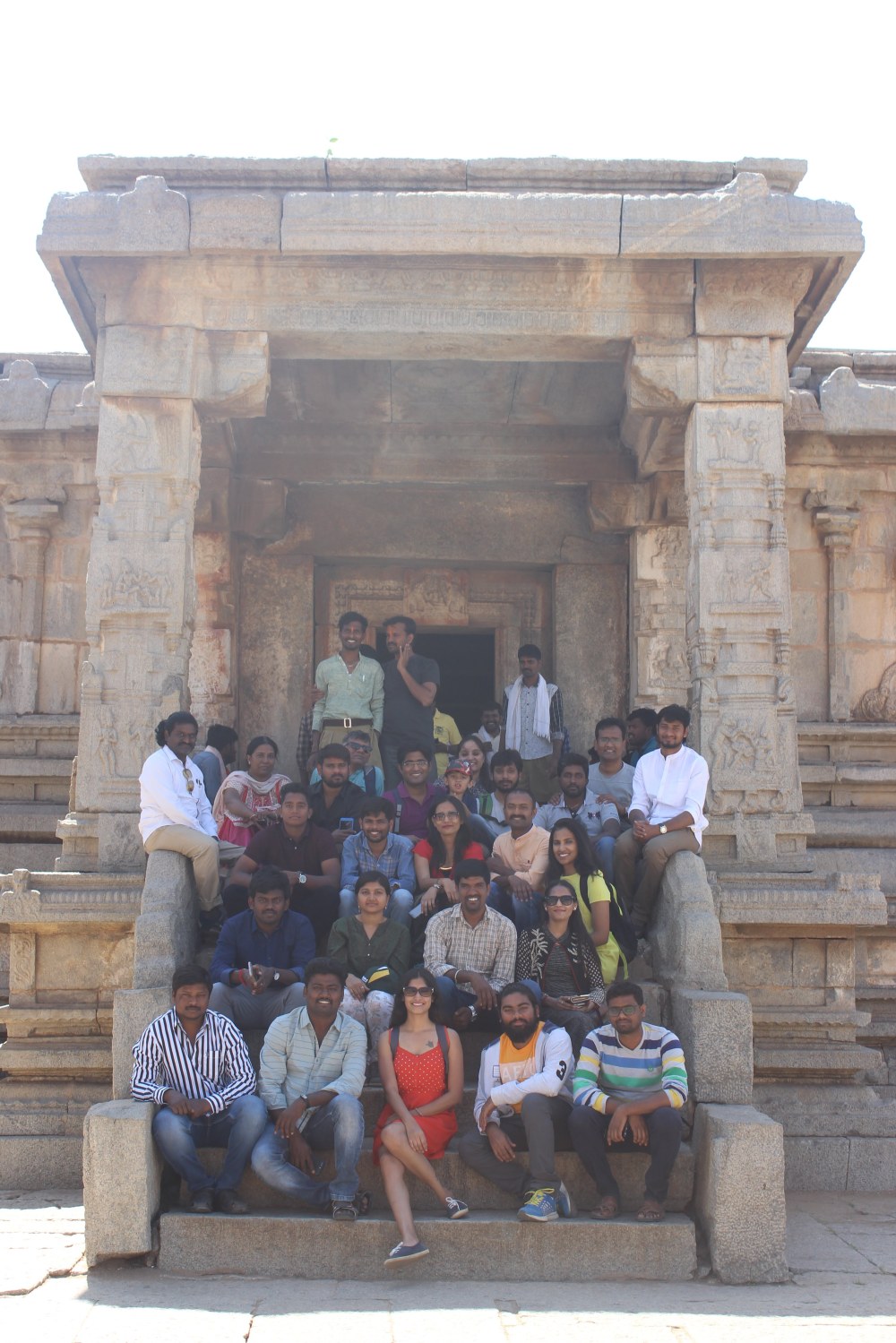 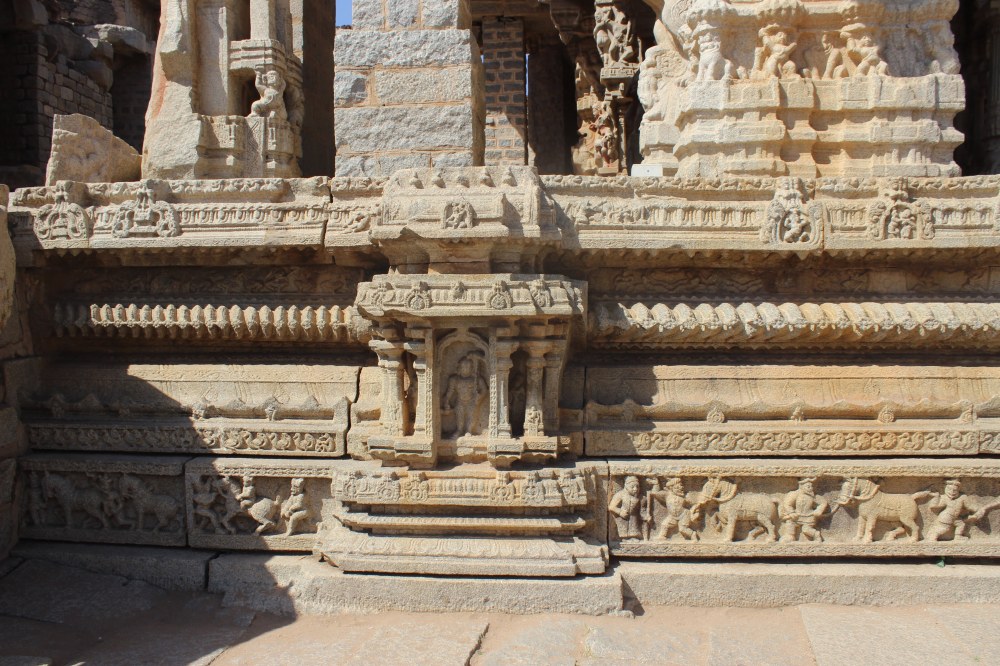 After exploring the whole place, we moved to the Queen’s bath. Not much here to do or see and so we spent our time monkeying around and taking pictures. Once outside most of us drank some lemon soda and buttermilk. (Bad idea) 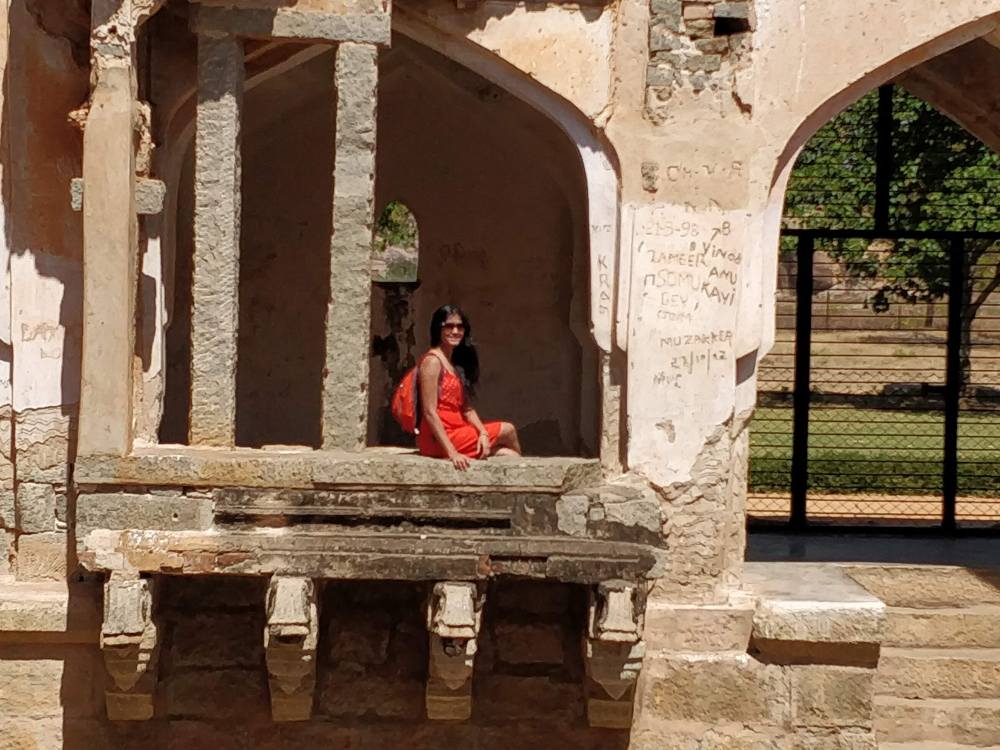 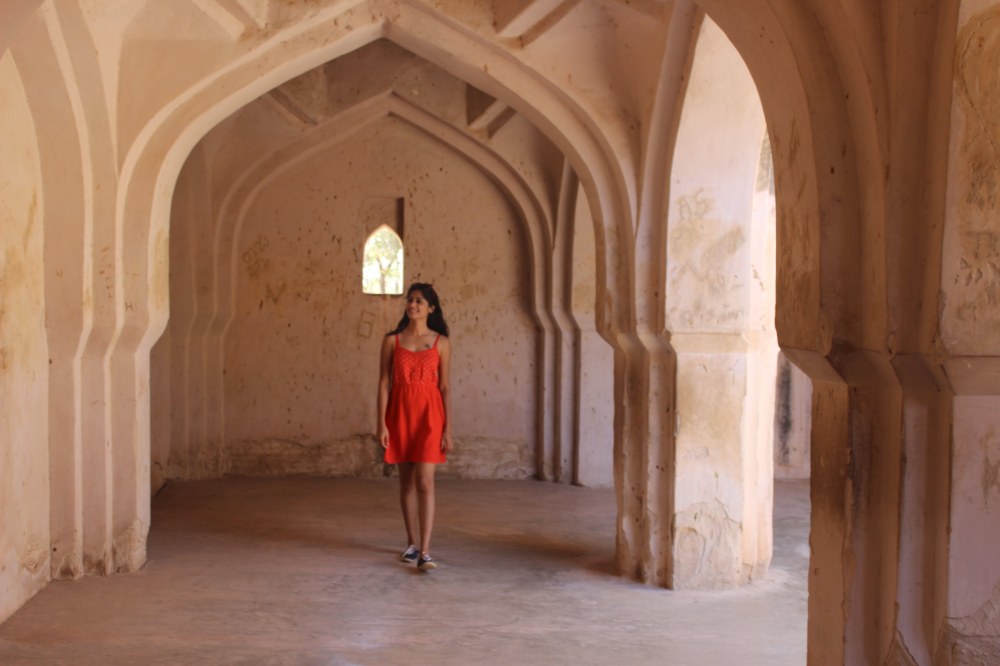 Next, we moved on to another section of the ruins. The King’s darbar or audience hall. The remnants of this structure tells us that it was huge with 100 pillars, as proven by the 100 pillar sockets. It was allegedly made of wood with sandalwood pillars. This was destroyed in a fire during a raid by the Mughals. We took another guide who showed us the stepped tank, another pushkarni, the royal stone plates and the underground chamber. 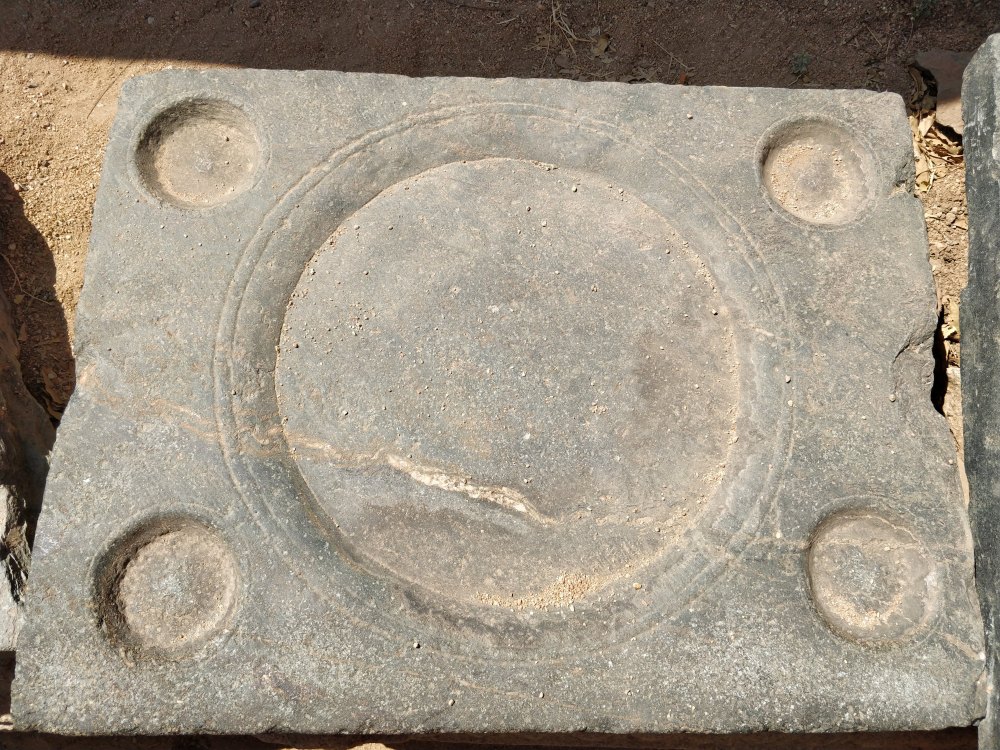 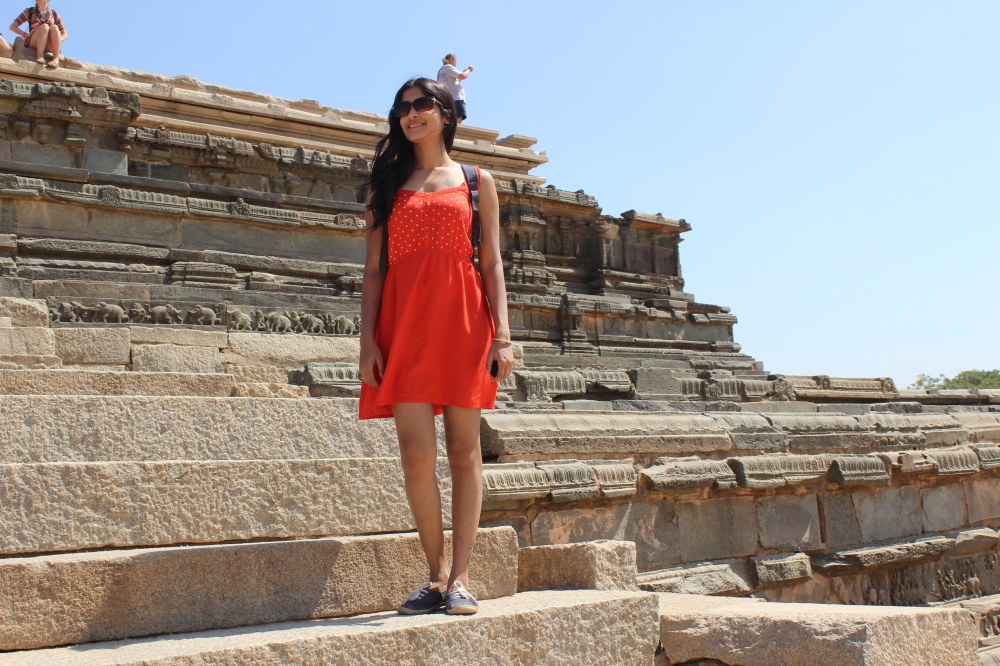 We were parched by now and coconut water came to our rescue before we moved on towards the Lotus temple and Elephant’s stable. A lot of restorative work was going on here and we could not get a closer look at the stables. But apparently, each stable could house two elephants!! 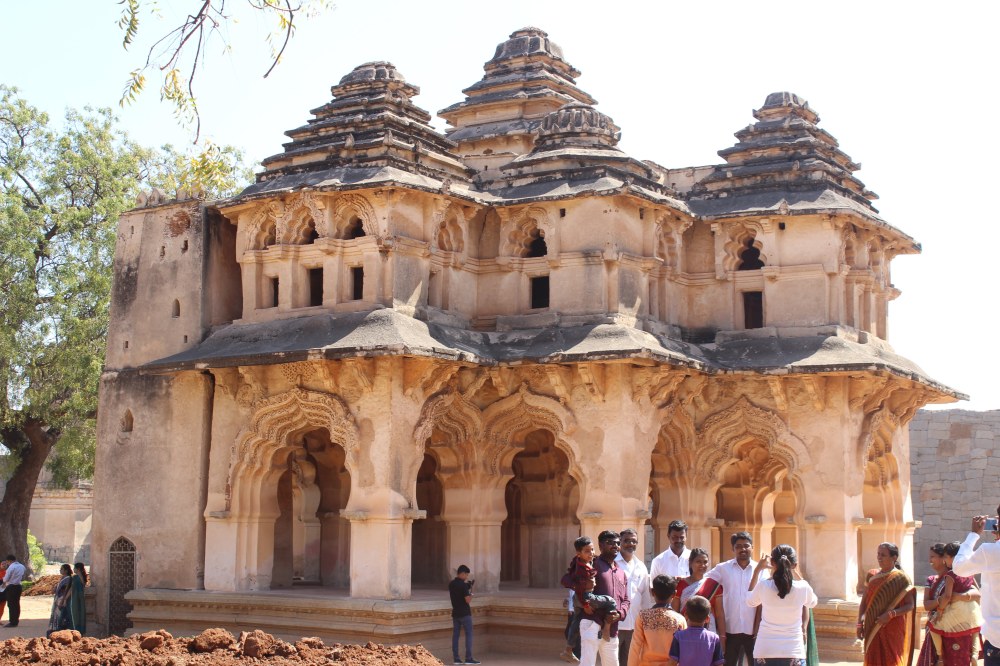 Next on the Laxmi Narasiha temple, followed by the Virupaksha temple. Another well known structure of Hampi. I was entering a temple after decades(I think) This is one of the few structures in Hampi which is left intact. And the most interesting fact is the use of mathematical concepts in the construction of this temple. During Sunrise, you can see an inverted shadow of the temple’s gopuram in a secluded section inside the temple. 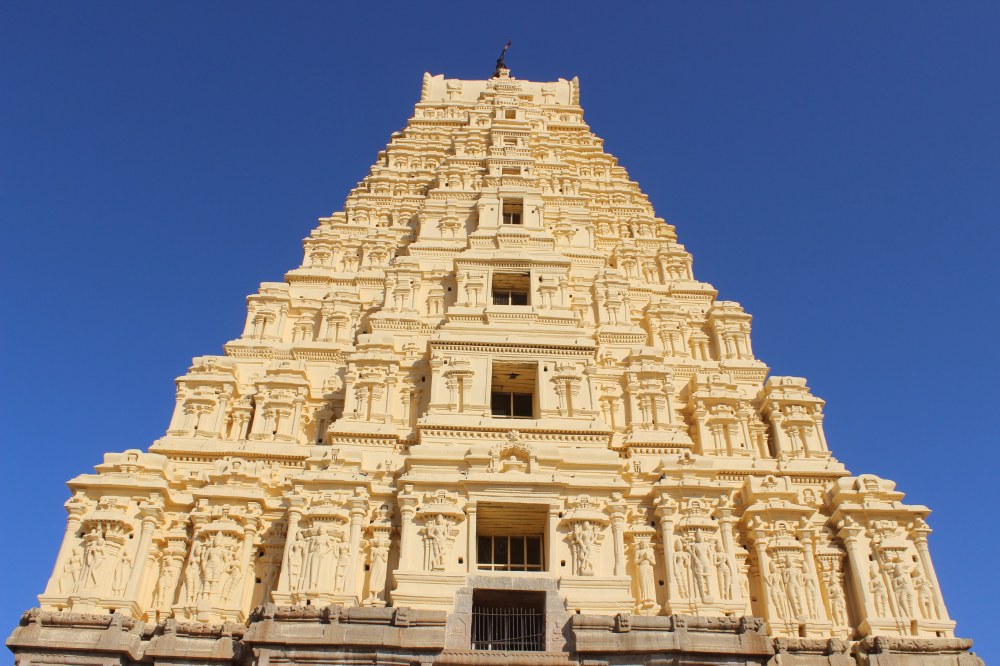 The last stop in our sight seeing tour was the Monolithic bull, facing the temple on the other end of the street. This Nandi bull is carved out on a single piece of rock. It was time for us to rush back if we wanted to make it back in time for our train, which by the way, got delayed by 2 hours and we kept swatting mosquitoes at the station.

I was exhausted and sweaty and dirty, but so happy to cross off a long awaited “to see” destination. I knew that I had missed a lot of other spots and I should have spent another couple of days to actually enjoy that place.